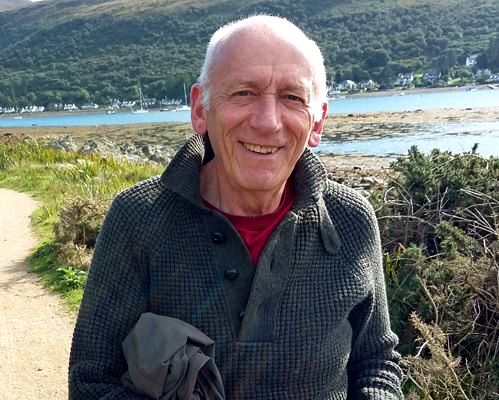 Ken Spencer was born in Liverpool and has a fine art background. After living and working in various locations on Merseyside and in Yorkshire, Ken moved to Northumberland in 1974. Ken's early work depicted the human figure and his one man exhibitions in Leeds, Hull and York showed his great skill in this area. An enthusiastic walker in Europe and at home, the move to Northumberland with its wild, empty landscapes, profoundly affected Ken's painting. His work developed quickly, turning from the figurative focus to dramatic images of the Northumbrian landscapes. Ken works rapidly in transparent layers and washes. These are then built up into vigorous textures with quite thickly applied opaque pigment. In this way he captures the quality of the light and the raw physical beauty of the landscape. Some of Ken's more recent paintings have become quite abstract in their insistence on capturing the transient effect of light on the landscape. Most of Ken's work is produced in his studio. Often as many as ten paintings are in progress at any one time.

In the last 15 years Ken Spencer has exhibited widely in both mixed exhibitions and in one man shows. His ravishing landscapes now hang in Europe and America as well as in England. Ken exhibits both locally and nationally at various galleries and is planning further one man shows in the near future.

Images must not be reproduced without permission of the artist